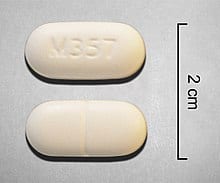 Hydrocodone is generally safe when used for a short time, but can be habit-forming when used long-term or in ways other than prescribed by your doctor. When left untreated, hydrocodone abuse can lead to more serious problems such as dependence, addiction, and overdose. People who become dependent on hydrocodone can safely withdraw from this medication using professional medical detox or medication-assisted treatment, which is available at many drug rehab centers.

Speak to one of our treatment consultants today about our specialized Hydrocodone detox and inpatient programs.

Hydrocodone is an opioid medication commonly used to treat moderate to severe pain. This drug is also well-known under the brand name Vicodin — a hydrocodone combination product containing acetaminophen. Hydrocodone has been used in the U.S. for medical purposes since the 1920s and is roughly 6 times stronger than codeine.

Why is Hydrocodone Addictive?

Hydrocodone and other opioids work by binding to opiate receptors in the body and brain to reduce the sensation of pain, but many times, these drugs also produce euphoria. Opioids tend to be habit-forming due to the way these drugs increase the brain’s production of dopamine — a feel-good chemical involved in feelings of pleasure and happiness. People who misuse hydrocodone typically do so to continue experiencing euphoria, which puts them at risk for dependence and addiction.

What is Hydrocodone Medical Detox?

Stopping use of hydrocodone abruptly after becoming dependent on this drug can lead to opioid withdrawal syndrome, which is characterized by symptoms including nausea, vomiting, insomnia, anxiety, diarrhea, and many more. Hydrocodone drug detox is a treatment that helps you safely stop using this medication without having to suffer severe withdrawal syndrome. Detox normally takes place at an inpatient residential rehab center where medications like methadone, buprenorphine, Suboxone, and naltrexone may be used to reduce and prevent withdrawal.

What Happens at Hydrocodone Drug Rehab?

Many who become dependent on hydrocodone also become addicted to this opioid, and are unable to quit using due to compulsive drug use despite negative consequences. Opioid addiction can be effectively treated using behavioral therapy at drug rehab, which helps people identify and overcome the triggers and reasons they started abusing hydrocodone in the first place. Support groups, individual counseling, cognitive behavioral therapy, and therapeutic activities like yoga and meditation are just some treatments used at many inpatient residential rehab centers to treat opioid addiction.

America’s Rehab Campuses use medical detox and many evidence-based therapies that can be personalized to help you or a loved one safely overcome opioid addiction. Fill out our insurance verification form today or call 833-272-7342 to learn more about your benefits and deductibles for addiction treatment.