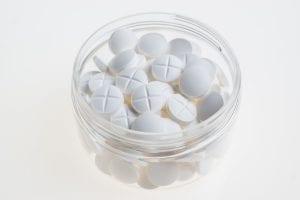 Tramadol is a prescription drug with a risk for abuse and dependence, and can be habit-forming with prolonged use. People who become dependent on tramadol and who suddenly stop taking this drug can experience withdrawal symptoms including panic, nausea, diarrhea, and hallucinations, and are highly prone to relapse and overdose. Tramadol dependence and addiction can be safely treated at drug rehab centers using medical detox or medication-assisted treatment, and with a range of behavioral therapies.

Speak to one of our treatment consultants today about our specialized Tramadol detox and inpatient programs.

Tramadol is a synthetic opioid that works just like morphine, codeine, and oxycodone for use in treating moderate to severe pain. The drug works by binding to opiate receptors throughout the brain and body to reduce the sensation of pain. But unlike many other opioids, tramadol is entirely synthetic and may produce additional withdrawal symptoms such as paranoia, confusion, hallucinations, and panic attacks when stopped abruptly. Tramadol is commonly available under the brand names Ultram, Conzip, Ryzolt, and Rybix, and also comes as a combination product with acetaminophen under the brand name Ultracet.

How Do People Become Dependent on Tramadol?

Tramadol and other opioids are commonly misused due to the way these drugs increase dopamine production in the brain to cause euphoria. People who misuse tramadol can become tolerant to this drug and start using higher amounts to experience euphoria. Eventually, this behavior can lead to physical dependence on tramadol and opioid withdrawal syndrome when people try quitting abruptly. In many instances, people who try stopping tramadol on their own end up relapsing to avoid withdrawal symptoms — putting themselves at risk for a fatal overdose.

What Is Tramadol Detox, and Why Is It Important?

Tramadol detox helps people safely withdraw from tramadol with a reduced risk for complications like panic attacks, relapse, and overdose. Tramadol detox usually involves the use of medications like buprenorphine or Suboxone that relieve and reduce opioid withdrawal syndrome. Since tramadol is a synthetic opioid that may produce unique withdrawal symptoms, detox is often safest when performed at an inpatient residential rehab center where patients can be closely monitored by trained medical staff during withdrawal.

What Happens at Tramadol Drug Rehab?

Tramadol drug rehab uses a range of therapies and therapeutic activities to help people recover from opioid addiction. Addiction is a chronic, complex disease characterized by compulsive drug-seeking and use, and often requires ongoing treatment in the form of behavioral therapy. Cognitive behavioral therapy helps patients identify, avoid, and cope with situations that commonly lead to drug use, while motivational incentives use positive reinforcement to motivate patients to stay abstinent from drugs like tramadol. These therapies and many more are often included in inpatient residential rehab programs and partial hospitalization programs.

America’s Rehab Campuses use medical detox and many evidence-based therapies that can be personalized to help you or a loved one safely overcome opioid addiction. Fill out our insurance verification form today or call 833-272-7342 to learn more about your benefits and deductibles for addiction treatment.